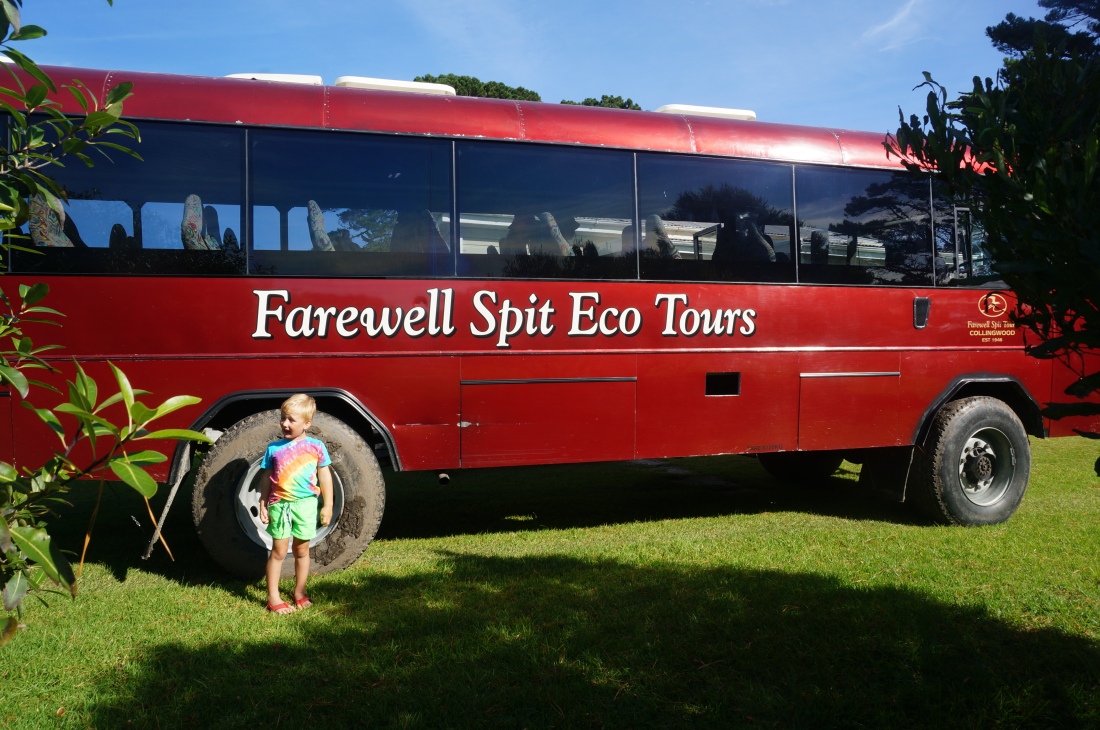 At the northern end of golden bay is the Farewell spit, it’s New Zealands longest sandspit at 35 km long. It’s also a nature reserve and because the wetlands is such an important breeding grounds for so many birds it’s more protected than our national parks. The only vehicles apart from Doc vehicles that are allowed access are from one tour company, you are also only allowed to walk on the first 4 km of the spit, though after driving out there on those miles and miles of sand I am quite sure I would have had more than enough after walking those 4 km. So we decided that this was something worth doing and put our tourist hats on for the day and joined the tour.

It is hard to actually grasp how long the spit is when you are driving towards it and looking out, because you actually can’t see most of it, some of it disappears in a mirage and then you see what you would likely guess is an island where there are a patch of trees growing, then past that there is a good ten kilometres that you again can’t see. Even once the driver had told us all this it wasn’t until we were actually on the beach driving along that you fully grasp how big this sandspit truly is. Our first stop on the beach is Fossil point, this is the end of the beach where visitors can walk to so being a fine day there are plenty of people wandering around, exploring the rock pools and the beach. I quickly regretted my choice of putting Oliver in socks and shoes as he tore around the beach splashing in every puddle he could find, luckily I was quick enough to stop him before he went in further than his knees and double lucky I had popped in his jandals in case he got hot in the afternoon.

After this stop it was time to head towards the lighthouse, with over 20 km of sand to negotiate it was an entertaining trip. A few seal sightings, plenty of birds and sand that seems to stretch on forever. 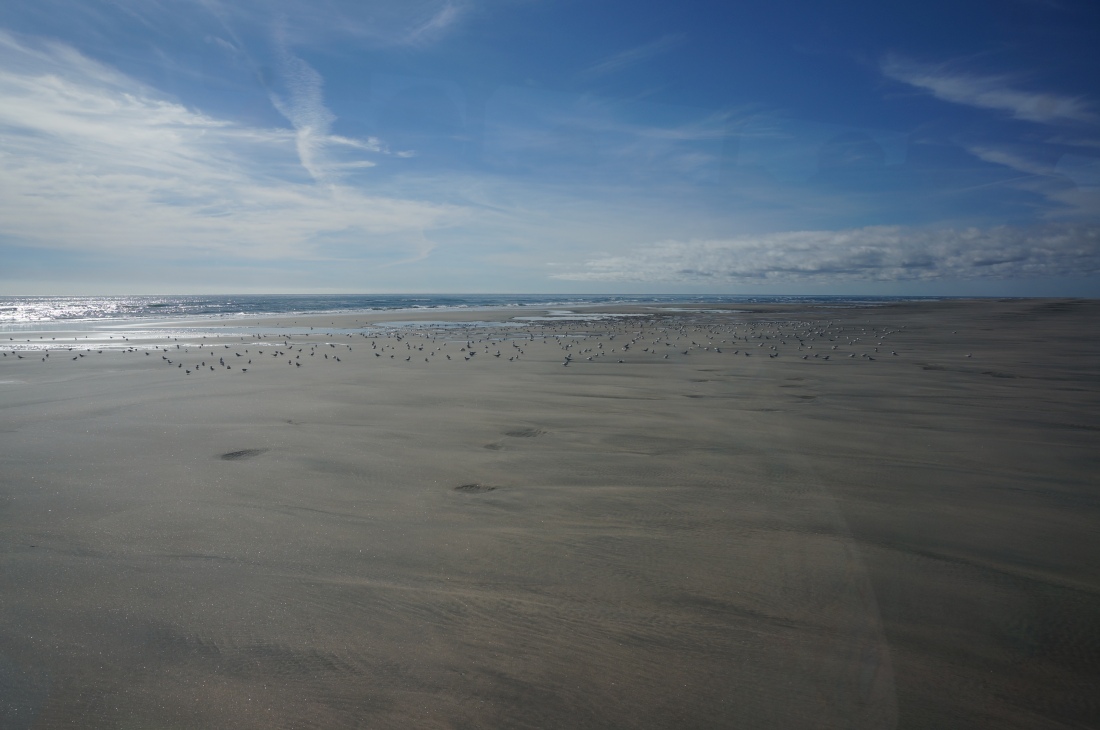 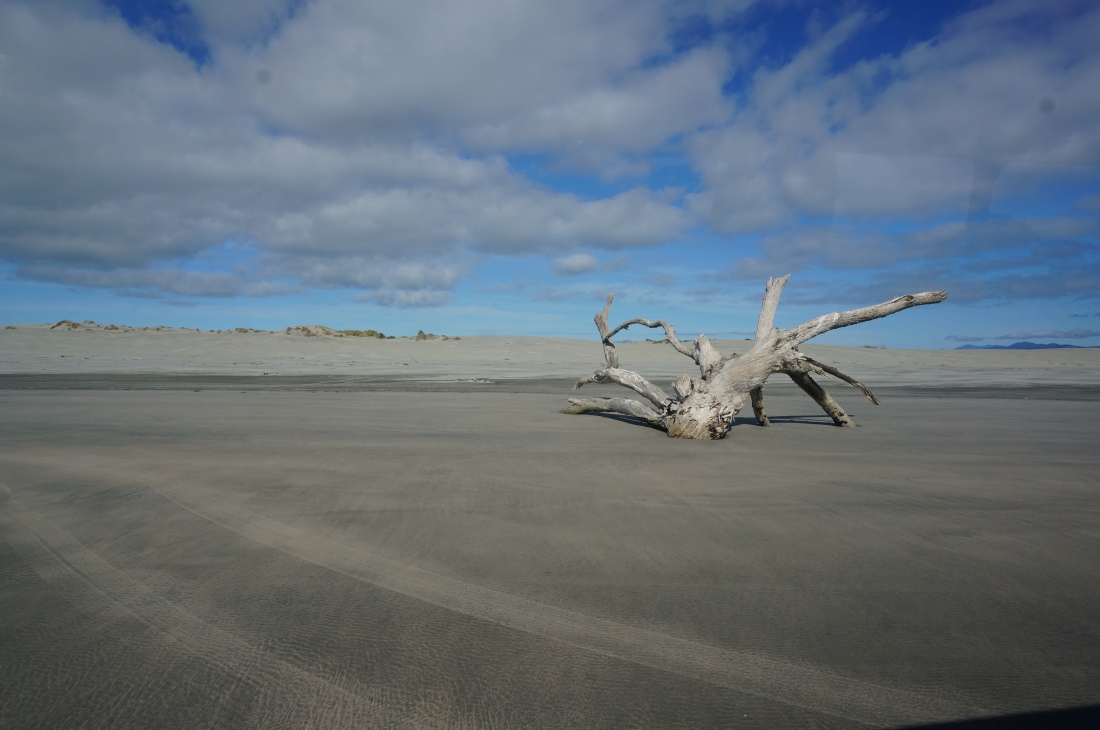 There has been a lighthouse here on the spit since 1869 and originally there were three lighthouse keepers stationed out here to man it. It is now automated but the three houses the keepers family’s lived in still remain and the trees that were planted to make their life on a giant sandspit more bearable have transformed the area in to a lovely little green oasis. You can see why they say the lighthouse keepers were devastated when the lighthouse was automated and there jobs there ended, it was no doubt a fairly idyllic life for people who were well suited to its challenges. We had lunch and an explore around the lighthouse, Oliver’s main disappointment was that the second tour bus got stuck coming through the soft sand to the lighthouse and our bus didn’t! But he was quickly consoled by the fact that our bus travelled faster on the sand so we were the first to get places. He was also rather impressed with the array of huge whale bones they have around the house where we ate lunch, there are a large number of whale strandings in Golden Bay probably due to the bay being so shallow, the tide going out very quickly and more than likely the spit itself.

Once we left the lighthouse behind we drove a small bit further down the beach, as far as they can safely drive but far enough to grasp how far that sand actually extends and how much it curves around. After turning around and heading back the way we had come there was one final stop on the spit, perhaps the most fun part of the trip for the smaller people on board, time to run down some giant sand dunes! Wayne was a champ running up and down those dunes a good dozen times, I went down twice, up once and that was more than enough of a workout for me. 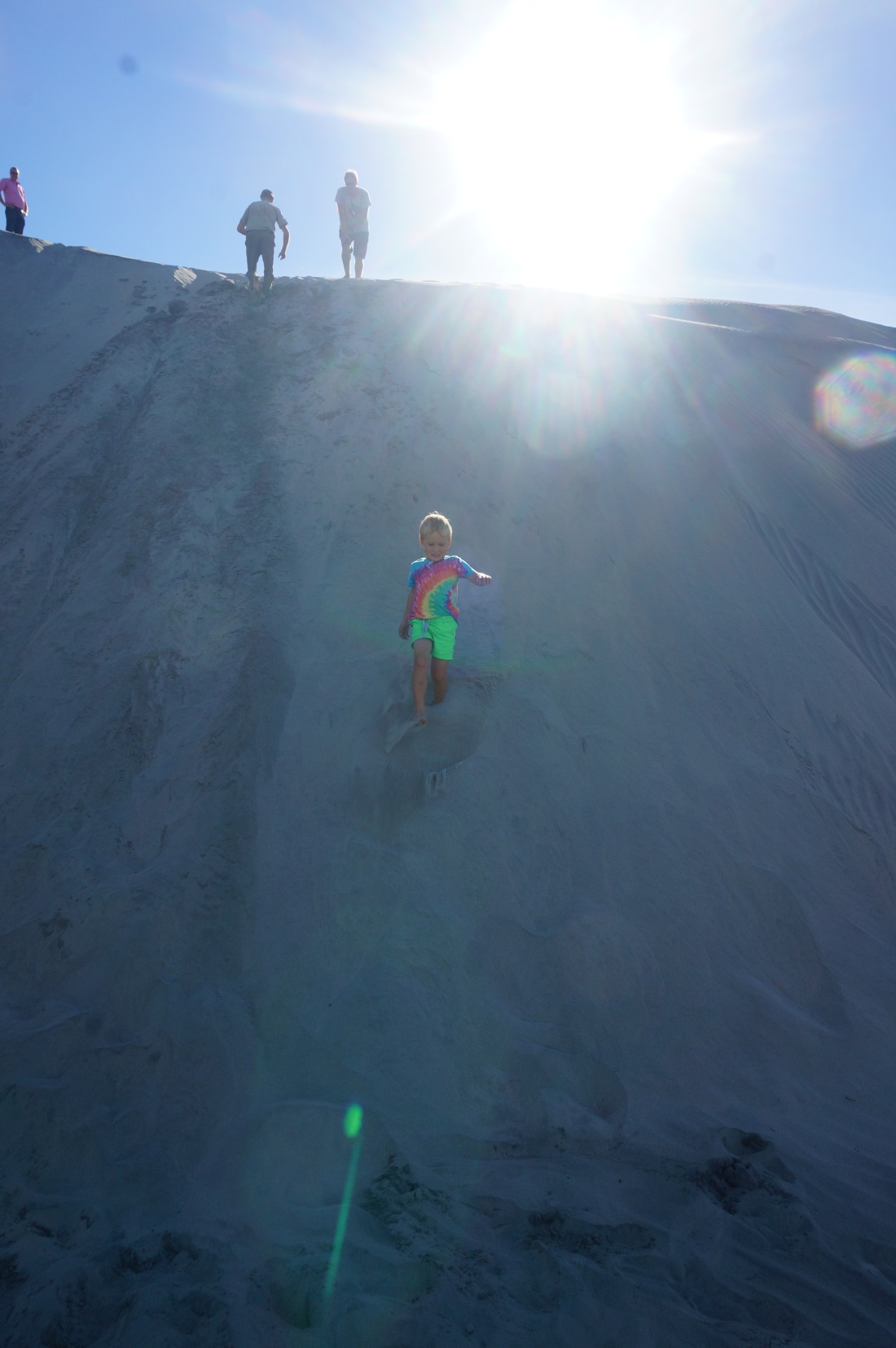 It took a bit to convince Oliver to leave those sand dunes behind, they were the perfect thing to unleash some of his boundless four year old energy on. I imagine those mothers of young children at the lighthouse sending them to run up and down the dunes when they got restless and tucking them in to bed at night well and truly worn out. For us there was a bit more driving and a quick stop at Cape Farewell, the northern most point of the south island. 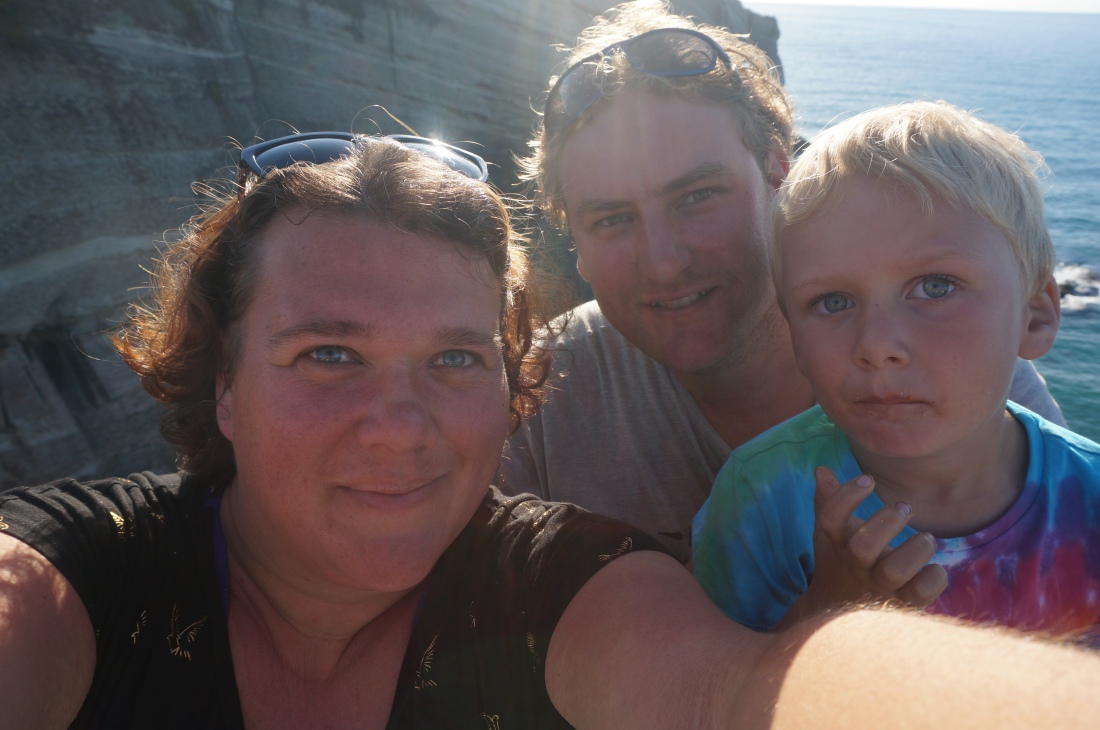 This trip exceeded any expectation I had of it. The spit is its own little world out there and it’s amazing to see the amount of bird life that is living out there, left alone their environment not being interfered with by humans. It makes you wonder if this is not the tactic we need to take more often to help some of our endangered birds, reserve some important areas that are solely for there use so they can just do what they have been doing for their entire existence before we started changing there environment for our own purposes. What ever the solution is I know that exposing our children to the beauty of the world around them can only help when it is their time to be the caretakers of it. Because if they don’t see the world and the creatures in it they will never know they need saving.

One thought on “A day on the spit”