Not surprisingly to go along with his deep love of caves my husband also has a love of old tunnels. Gold mining, coal mining, train tunnels, really just any old hole in the ground that you can walk (or even crawl) through. I find the history behind the tunnels often fascinating and don’t mind a walk through the bush to find them, my tolerance for clambering through them is not as high, luckily now Oliver is keen to clamber through with his Dad I am able to opt out of the darker, more dingy looking tunnels in favour of a quiet moment in the bush while they explore. Our last few weeks Wayne and Oliver have been in absolute heaven with all the old mining areas we have come across to explore, the history of mining here on the coast is extensive. So to avoid all my west coast posts sounding like mines, mines and more mines I’m going to write about them all together – the mining extravaganza you could say!

In the early 1800’s they started mining coal around the Westport area and for many years coal was king here. We visited two really interesting coal mining areas, the first of which was Charming creek. There is a walking/mountain biking track here that follows the old train tracks that were used to cart coal from the mine down to the coast. If you do it in its entirety the track is 3 hours one way to walk, we decided that we would walk to a waterfall just over an hour along the track and turn back there, then drive up to the other end of the track where the mine was to have a look at that. There are actual tracks along quite a lot of the walking track and plenty of mining relics along the way to keep it interesting. There are some places along the track where the track is literally covered in coal and also a few small tunnels to walk through. Just before the waterfall you cross an old swingbridge that was built to replace the old rail bridge in the 1970’s, about halfway across the bridge you start to see Mangatini falls. Even in the spring rain shower that chose this exact moment to arrive the falls were pretty. 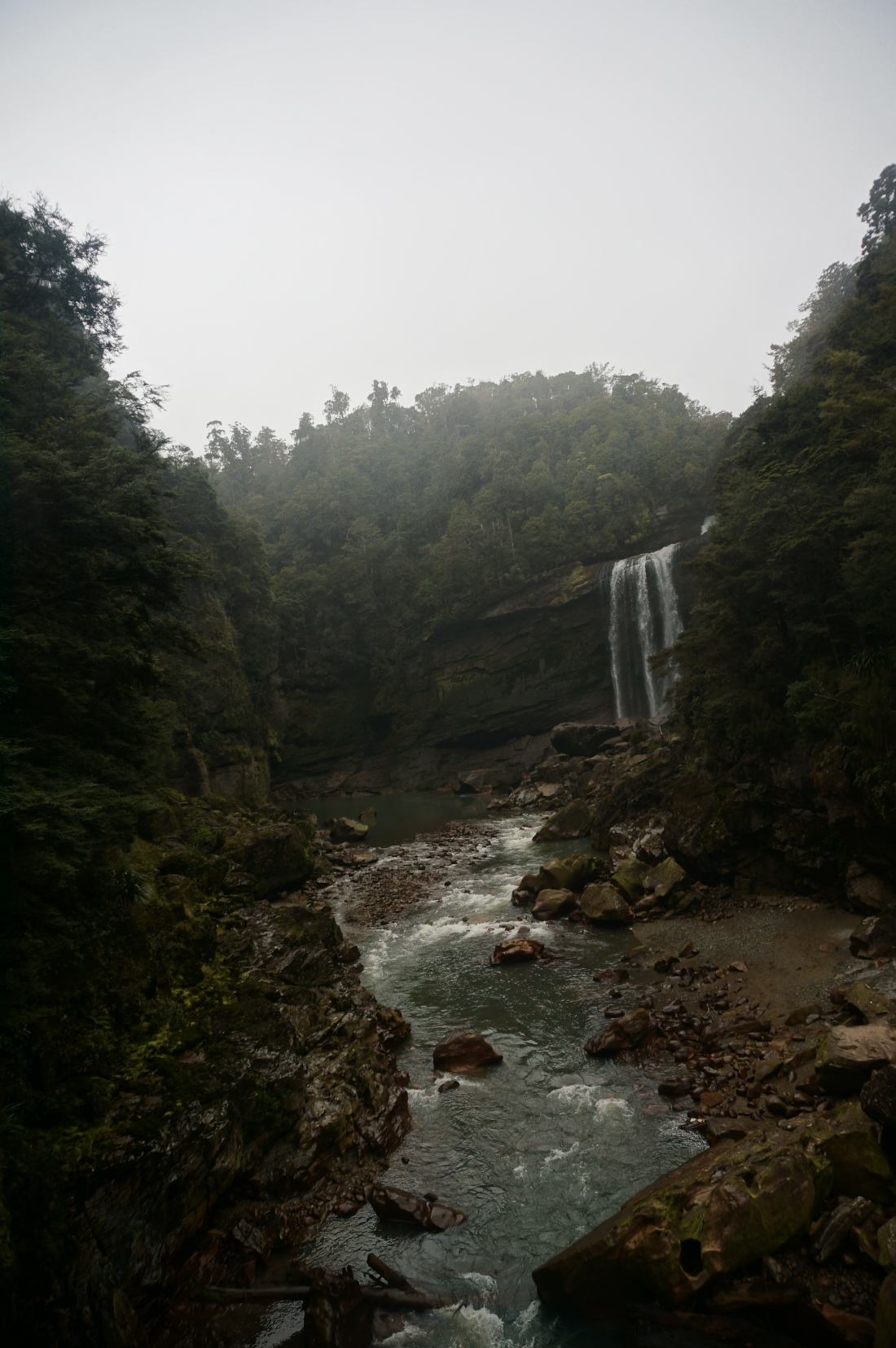 Right beside the viewing area of the falls there is a tunnel to walk through that rather conveniently for us had a board walk built through it and was a surprisingly dry spot to wait out the rain. It eased quickly as spring showers tend to do and then it was an easy walk out the way we had come.

The second coal mining area that we visited was Denniston. When they found coal here the biggest problem was how to get it down through the steep hills, through the bush to the coast where it could be loaded on ships. So they built a railway line up through the bush, up inclines so steep your head spins a little staring down them, built bridges to span the places to rough to build track on and they lowered the coal down in carts attached to cables. The workers and there families lived on the top of the hill, for years the only way to or from that mine was up those inclines. You imagine those mothers with children in tow making that long treacherous trip, living with the constant worry of the danger their husbands jobs put them in and you see so clearly how much life has changed for us. 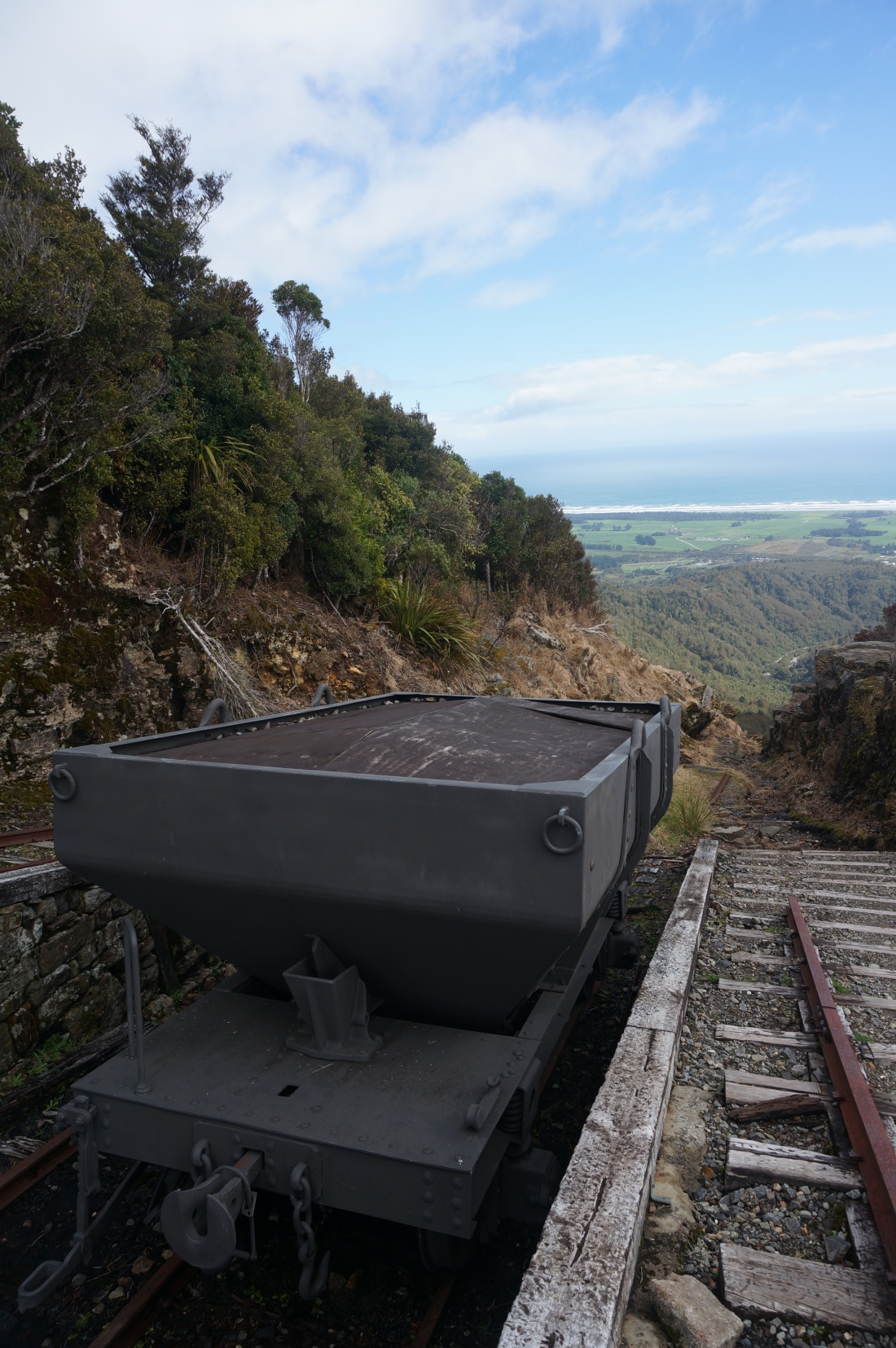 On top of that hill now there is plenty of relics and rubble to wander through. And a great job has been done with information boards dotted around with pictures of what it looked like in its prime, what life was like for the people who spent their lives here. Further up the road we did an easy little walk along another old rail line and after passing lots of fallen chimney stacks from old miners cottages, piles of old rusted cables  that were used to pull the coal carts and plenty of other debris we finally found one thing that is still largely intact. The old fan house that was used to pump fresh air down into the mine.

To even things out as we have travelled further down the coast there have been lots of old gold mines to explore. We visited a great little spot in Charleston called Mitchells gully mine, the tunnels here loop through the hill like a little maze and the owner gives a basic but informative chat about the mine, all for the grand sum of $10 per adult. Once you get to Greymouth/Hokitika area the bush is full of walks that boast some mining history. Our favourites where the Cold creek walk, which is a bit of a drive in from Greymouth and the Terrace tunnel track close to the Goldsborough DOC camp. At the Goldsborough camp there is a section of river where you can fossick or pan for gold. On seeing Oliver attempting to pan for gold with a plastic bowl another visitor gave us an old pan he had spare and the boys spent a bit of time trying to strike it rich. You can see how men got swept away with dreams of finding gold and went to these amazing lengths to do so. They dug these tunnels through the earth and the rock a lot of the times with just a pick, a spade and their own back breaking work. I for one find it inspiring, but it also makes me grateful that my time for life is now and I have the freedom to run away in a bus. I wonder if these hardworking men would have understood the way we live and what drives us to do it if it was them looking in at my life the way I look back at theirs.