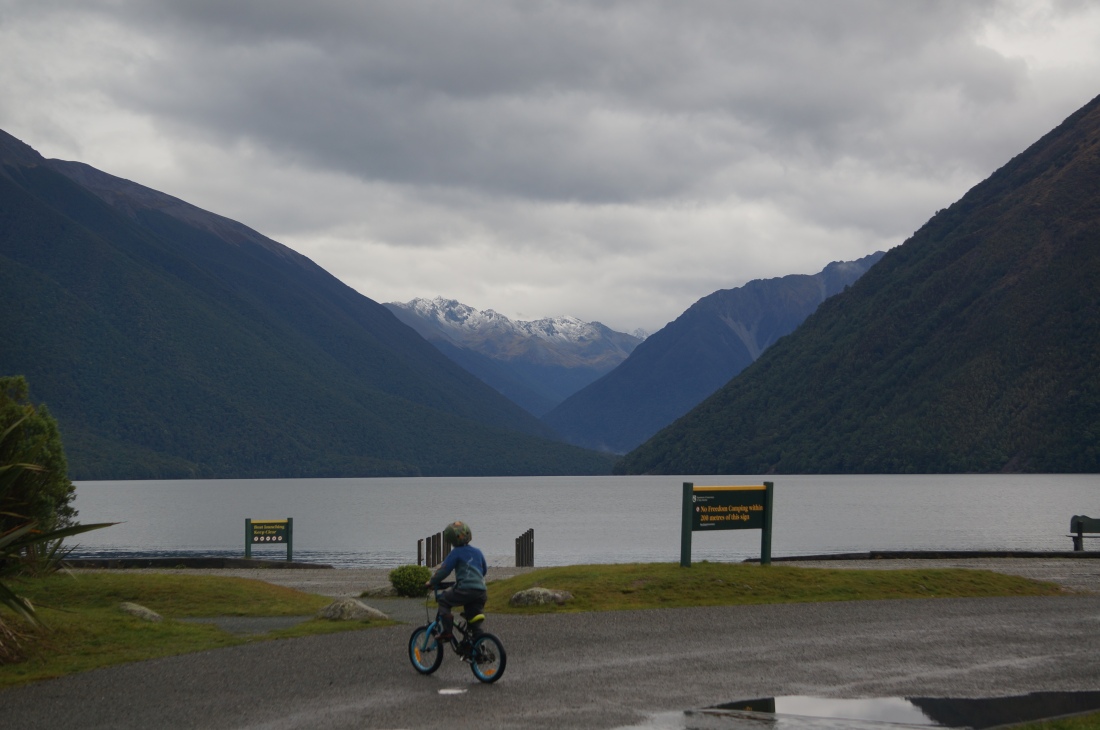 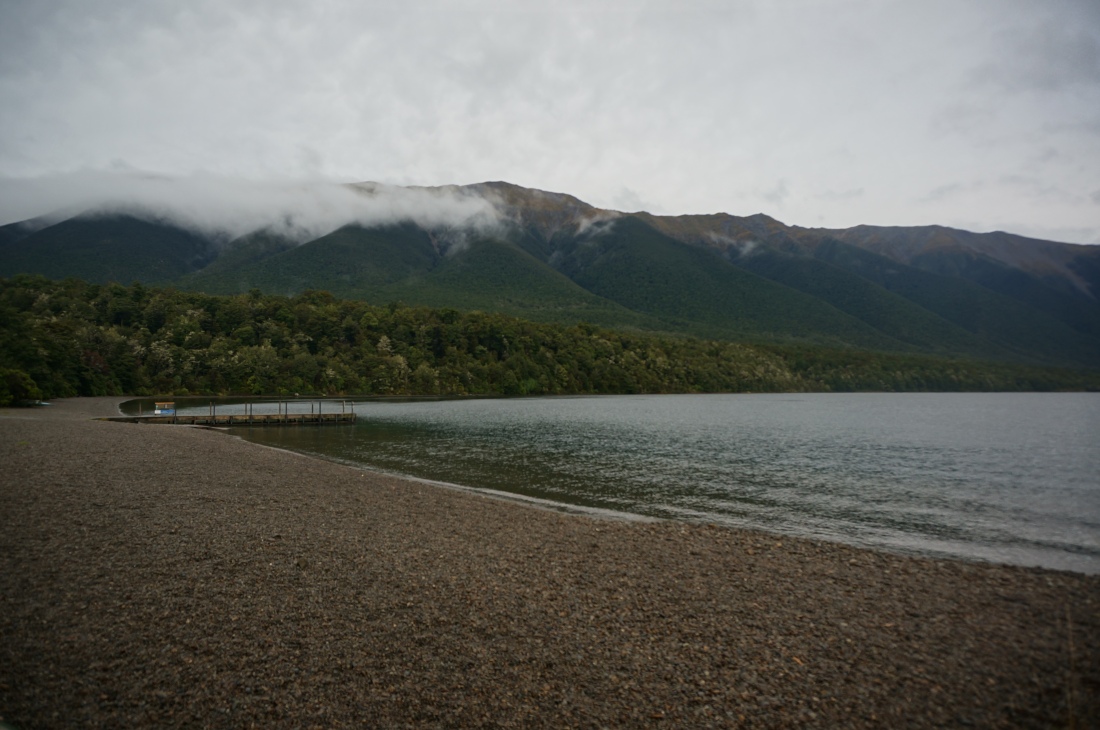 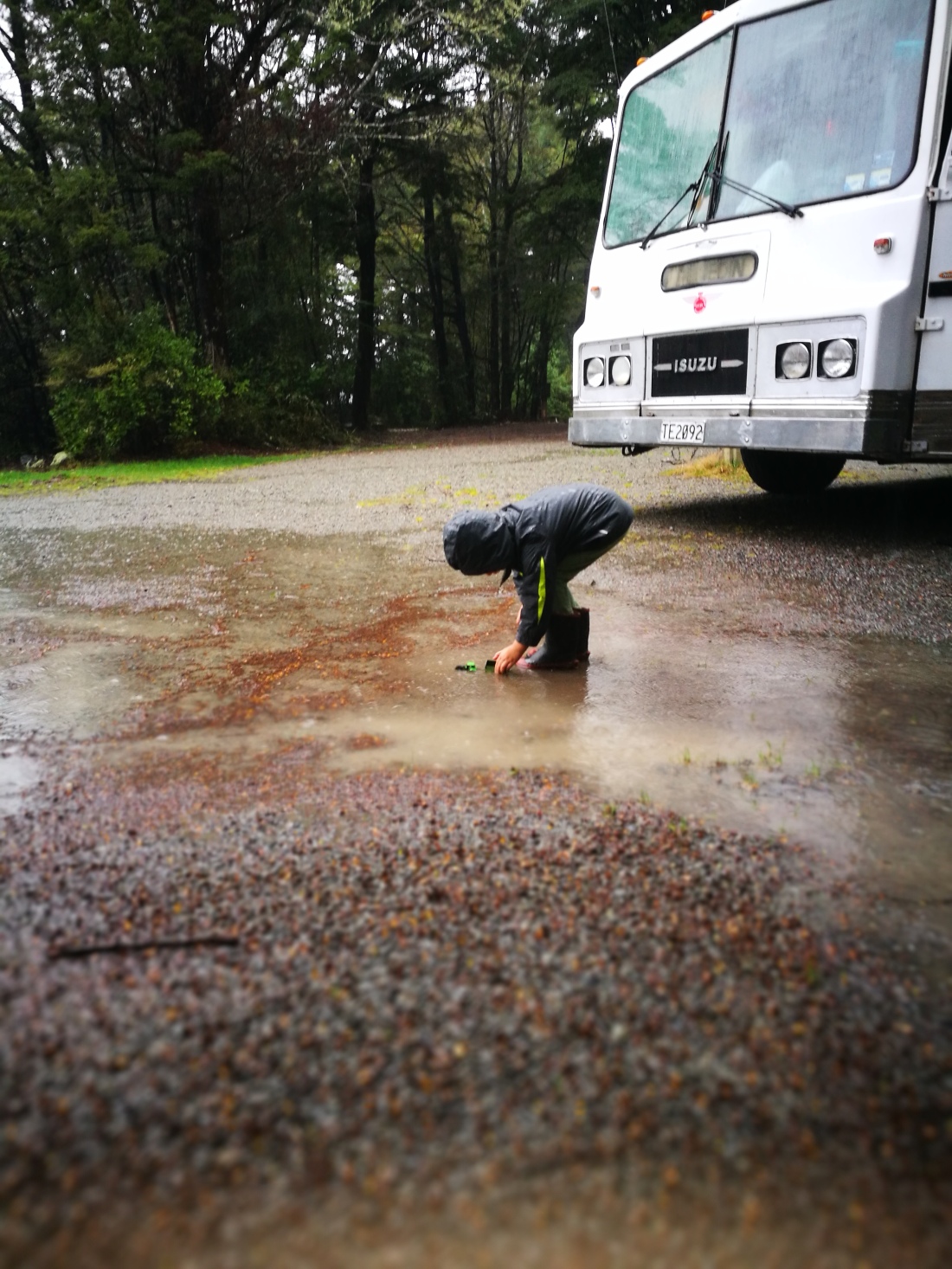 When we left Kaiteriteri we had two and a half weeks to play with before we planned to be back in Nelson to do a bit of work. So we decided to head towards the Nelson Lakes national park. Our first night out we stayed at a freedom camping spot in the Moutere valley, it was a fairly basic affair, a long drop toilet which I was very grateful we didn’t have to use as it was in such a shocking state and a big grassy area next to the river. It was the first free spot we had found in a while as the Nelson area is not very freedom camping friendly and it felt good to get a free night in. As the day drew to a close the drop in temperature was much more pronounced here than what it had been on the coast and we got the feeling that this would be a growing trend for the next part of our travels.

It was raining the next day as we headed to Lake Rotoroa, so Oliver and I decided to follow behind Wayne in case we stumbled across something to do on the way. Oliver finds it quite amusing convoying this way with Wayne, there is normally a running commentary from the back seat about what he see’s the bus doing. We can also talk to each other on our walkie talkies which is a rather amusing way for a young boy to pass the time, this all serves to make our travelling not seem separate even though we aren’t in the same vehicles. Though to be honest I don’t mind having to drive the car and be apart when we move on from places. I did wonder if I would dislike it, but it is actually nice in some ways to have space from each other every now and then. And on the days where the roads are going to be steep or windy and the bus is going to be moving quite slowly it is good to have the option to just go ahead and find something to do to amuse ourselves at our destination. It was good we were together on this particular day because we found an old railway tunnel to walk through, a short enough walk to be achievable in the drizzly day we had but still an interesting break from the driving.

After that it was just a short drive on to Lake Rotoroa and by the time we got there the rain was quite heavy. The campsite unfortunately turned out to be quite water logged and deciding we didn’t want to risk the bus becoming a permanent fixture we found a spot to park up in the car park by the boat ramp so we could have lunch then formulate a new plan. But while we ate and then killed time watching a movie in the hopes the rain would clear long enough for us to at least look at the lake, we decided that the whole place was pretty empty, there were not even many day visitors around and those that came just snapped a picture and left.  So we spent the night there anyway just parked in the day visitors car park instead of the campsite. A little hard for me since on some deep, deep level I am a bit of a rule follower, but the worst that was going to happen is we be asked to move on if someone came to check on the camp – which they in the end did not. Once again the rain cleared suddenly in the late afternoon revealing a gorgeous view of mountains across the far end of the lake. 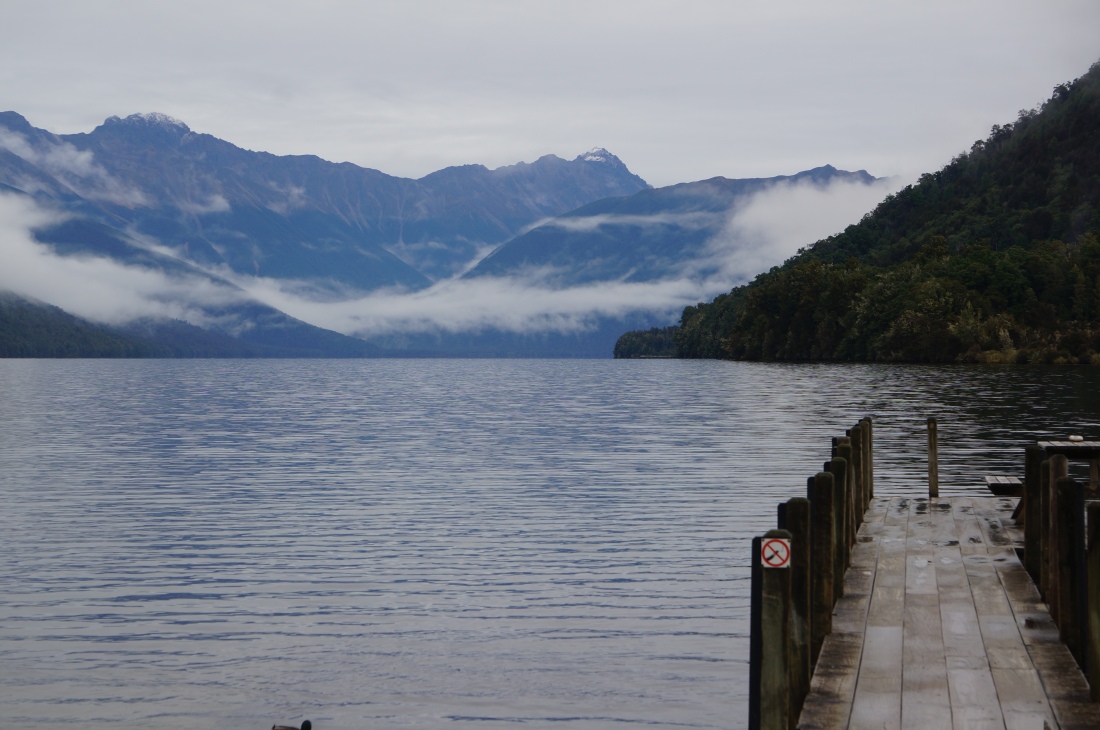 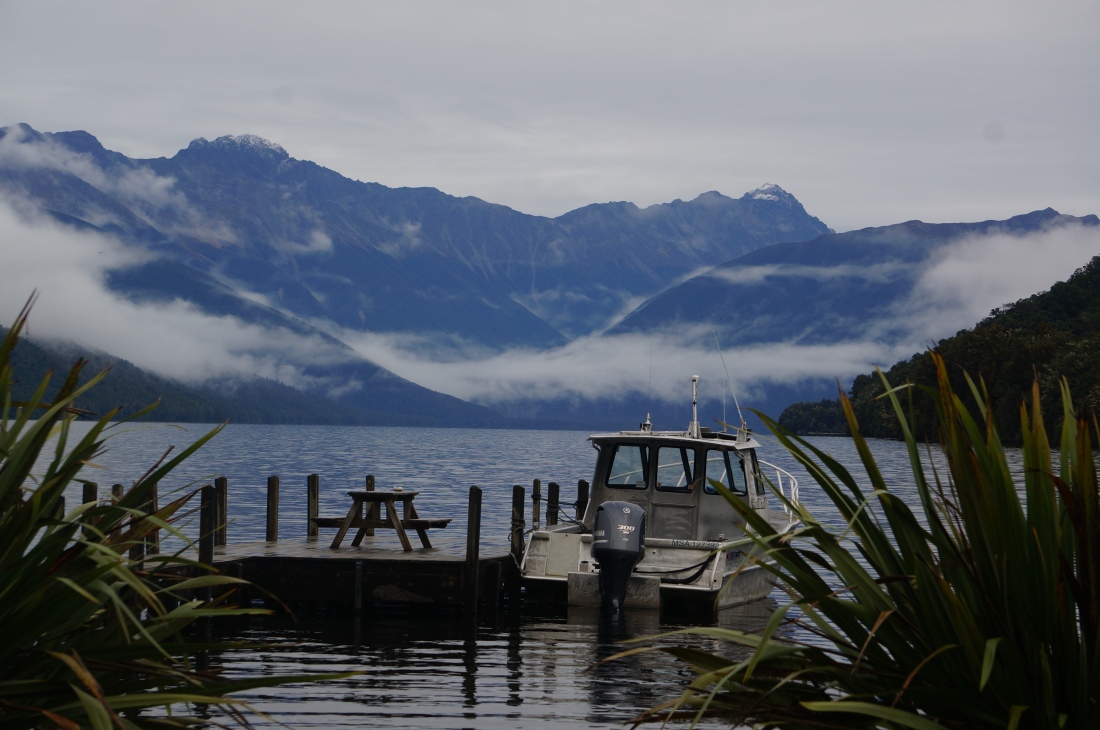 The next day we hired a canadian canoe and spent a pleasant morning paddling on the lake in the misty but fine day that we had woken to. Even shrouded in clouds this lake was a little slice of paradise. The overwhelmingly green colour of the bush told it’s story of a place that see’s it’s fair share of rain. Spongy bright green moss wrapped around the trunks of the trees and across the ground, softer lighter green moss hanging from the branches. The lake itself is crisp and crystal clear. Just to top it all off it is home to the friendliest fantails I have ever come across. More than once they landed on my shoes or pants legs, flying so tantalizingly close you would swear that if you just held out your hand they would sit there for just a second before flittering away with a cheeky little chirp.

From the lake it was just a quick trip to Murchison where we would stay for two nights. Murchison is only a small town but with a NZMCA camp right in the small town centre it was a great place to base ourselves. A short stroll to the shops if you need supplies, a small playground and even a skate park and bike track just down the road, these things are all a priority when travelling with a bike mad young boy. Unfortunately there was more of the wet stuff around during our time in Murchison so we had a bit of a quieter time. We did visit New Zealand’s longest swing bridge, the bridge itself was very, very long and a bit of fun. But I’m not sure it was worth the $10 an adult when what is on the other side is a lot of muddy tracks, a lot of blackberry and a ton of small biting insects. The upside to the rain is a bit of down time in the bus, it is tempting to be very, very busy all the time as if this was a holiday and you are trying to cram in the fun times while you can. Now that we are nearly two months in to this new life it is really necessary to make sure we do have some quiet days, too much all the time leads to one exhausted, grumpy little boy, not ideal when confined to a small space together. Our days are also continuing to get cooler and cooler, so a slow morning where we light the fire and stay cozy in the bus for a bit longer holds more appeal now. These moments are just as great as the things we are doing and the places we are seeing. It feels like such a luxury to have all this time together, to not wake up to a house that Wayne left while we were still fast asleep, to have no pressing jobs to do, no kindy to get Oliver to. It also feels like something that we want a lot more of in our life, even when we steer our lives back in a more conventional direction. But for now we will just enjoy what we currently have and keep wandering.